The Your Tomorrow Pension Scheme is one of core elements of the Bank’s remuneration package and one of the most important benefits staff receive. The value of defined contribution pension schemes like ‘Your Tomorrow’ depends on the level of funding put in by the member of staff and the Bank, the level of management charges payable over the lifetime of the fund and, most importantly, the investment returns of the fund.

The big difference with defined benefit pension schemes is that there are no guarantees about how much the fund will be worth when the member come to collect it.

According to the last set of accounts there are 49,136 active members and 29,303 deferred members of the ‘Your Tomorrow’ Pension Scheme. The total value of the funds is just over £2bn, as at the end of 2016.

Members of Your Tomorrow had a choice of 14 funds to invest in under two investment approaches; LifePlan and PersonalChoice. The LifePlan approach splits the investment choices between Growth Funds and Approaching Retirement Funds. Members choose which Growth Fund to join and that is then switched to the Approaching Retirement Fund in accordance with the members chosen switching period.

Members who decide to use the PersonalChoice approach can choose from the six funds under Life Plan and an additional eight funds ranging from a UK Equity Fund to a Property Fund and a Corporate Bond Fund. All of the funds that were originally offered by ‘Your Tomorrow’ are well-established funds apart from Your Journey and Your Journey Extra.

Those two growth funds were created for the Trustee. It is the performance of those two funds we want to analyse in more detail in this Newsletter. In November 2017, the Trustee of Your Tomorrow announced that it would be changing the investment funds in which members’ money was invested. Those changes are happening now.

Independent investment advisers, Bestinvest, run a regular guide to avoid the worst performing investment funds, which they call ‘Spot the Dog’. If Bestinvest produced a guide for under performing funds managed by Trustee Boards, Your Journey and Your Journey Extra would be at the top of that list of dog funds.

The tables below show the performance of the different funds over 3 and 5 years. 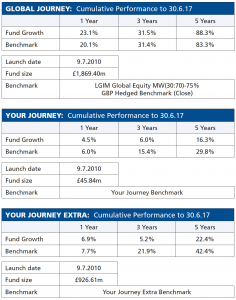 Asleep At The Wheel

Members of the Your Journey and Your Journey Extra Funds have lost out because their funds have not grown as much as they should have done. To put this in context, if a member of staff invested £2,000 a year for 40 years and the funds total costs are 1% of the money invested and the fund achieves average returns of 6% a year before fees, savings would grow to £249,472. If average returns fell to 4.5% then the fund would be worth £173,459, a difference of £76,013.

The Bank said the Trustee was moving to new funds because the old funds had been under performing. In a note to members of the Your Tomorrow, the Trustee said: “…it’s our responsibility to help you make the most of your pensions savings, to give you a better chance of getting the retirement you want. We’re making changes….with the aim of improving the performance of your investments.”. [BTU bolded text]

The Trustee needs to answer the following questions:

• Why did it take the Trustee so long to take action given that some of the Your Tomorrow funds have been consistently under performing for years?

• Why did the Trustee allow the fund managers to continue to under perform?

• What are the consequences of that under performance for members of Your Tomorrow and what is the Trustee going to do about it?

Changing the funds now, and hoping that members don’t realise the level of under performance, is simply not good enough. The Union will be writing to members with a draft letter for them to send to Jeff Sayers, Chairman of the Trustee Board, asking why it took him and is fellow Trustees so long to deal with the under performance of the funds and what the Trustee is going to do to make up the shortfall in pensions.

Members with any questions on this Newsletter can contact the Union’s Bedford Office on 01234 262868.