The GEC meets this week to discuss the future of the Bank’s performance management system. The exact details of the new system will be communicated to staff and line managers on the 2nd January 2019. We’ll discuss ‘check-ins’ or ‘catchups’ and ratings in our next Newsletter.

We have been saying for many years that the Bank’s current performance management system is of little value, with many staff saying it’s a pointless waste of time. The system creates unnecessary stress and anxiety both for the person being appraised and the person doing the appraising. More importantly, the current system takes up too much time especially for an organisation that has lost so many jobs over the years. We speculated a few years ago that the time spent on performance management including one-to-ones was equivalent to recruiting an extra 420 members of staff.

The Bank’s own research, which it conducted earlier this year, included a series of focus groups and those confirmed what our own research showed 3 years ago. This is what staff said:

The Bank also asked staff in a number of divisions what they thought of the performance management system and some of the key results are as follows: 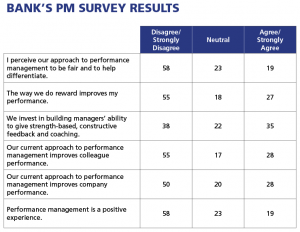 It’s taken 3 years for the Bank to catch-up with the Union and staff on this key issue. Over that period the Bank has steadfastly defended its failed system year after year.

In 2015 the Union carried out its own survey of staff and line managers.

Only 32% of line managers said that the performance management system was useful to them as a manager. 61% said that the system didn’t reinforce the culture of the organisation and only 21%, that’s 1 in 5, said that it drives high performance in their teams. That’s a statistic that should worry the Bank. The Bank needs to fundamentally review its approach to performance management because it can never hope to be the Best Bank for staff or customers if it spends so much time on a system that adds no value”.

In a separate survey we asked staff what they thought about the performance management system and we wrote in December 2015:

“When it comes to the end-of-year performance reviews we asked staff to tell us what phrase best sums up their feelings. 22% of staff said they “dread the experience” and 48% “feel it is waste of time”. Only 7% of staff said they “look forward to the review”. We then grouped the response choices of “don’t care”, “feel it is a waste of time”, “get nervous” and “dread the experience” to find that 86% of staff have a negative experience of the end-of-year review process. This is not ambivalence on the part of staff; it’s a pure love or hate relationship. Staff hate it. Simplifying the system and trying to make it more user friendly is going to be a waste of time. What’s required of the Bank is a fundamental reappraisal of its performance management system. Simply limping on with the same old system, year after year with minor adjustments being made at the edges is not going to deliver the best bank for staff. HR have buried their heads in the sand and seem incapable of delivering a performance management system fit for purpose.

It’s a pity that it’s taken the Bank 3 years to resolve the inconsistencies at the heart of its performance management system and to come forward with proposals for a modern organisation.

In our next Newsletter we will deal with the issue of ratings, managing performance and development and reward. In the meantime, members with any questions can contact the Union’s Advice Team on 01234 262868 Choose Option 1.